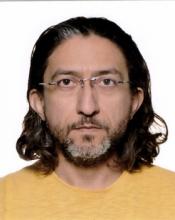 Dr. Acar was born in 1972 in Izmir, Turkey. He received his BS, MS and PhD degrees, all in electrical and electronics engineering, from Bilkent University, Ankara, Turkey, in 1994, 1996 and 2000 respectively. His PhD thesis was on Electrocardiogram (ECG) signal processing for diagnostic decision making and risk stratification, during which he spent a year at St. George’s Hospital Medical School, Dept. of Cardiac and Vascular Sciences. He was at the Stanford University, Medical School, Dept. of Radiology, 3D Lab. as a post-doc researcher between 2000 and 2003. He joined Bogazici University, Electrical and Electronics Eng. Dept, in 2003, where he is currently professor of  Electrical and Electronics Eng. He was a Mercator Visiting Professor at TU Munich, Chair for Computer Aided Medical Procedures & Augmented Reality, Germany, between 2012-2013. Dr. Acar is affiliated with Bogazici University, Center for Life Sciences and Koc University, KUIS AI Lab.

He received over 2000 citations for his papers, including 7 US patents.  Dr. Acar is the recipient of the Excellence in Research Award from Bogazici University Foundation (2006) and the Young Researcher Award from Turkish Academy of Sciences (2008).

His research interests are in the fields of signal & image processing and analysis in multiple domains (inc. medicine, industrial, finance), machine learning applications towards diagnostics and prognostics.