Its goals are to i) to review basic contemporary mathematical tools for image processing, ii) to introduce up-to-date algorithms on which active research is still being conducted, iii) to present the underlying ideas and theoretical background for these algorithms, iv) to discuss specific algorithms in more detail with an emphasis on their implementations, v) to develop practical skills for their implementation through applications and vi) to develop skills to conduct a complete research including the literature survey, problem solving and publication.

Grading And Course Load: All reports must follow IEEE Transactions format rules. It is strongly advised that you read the guidelines in "How to write a paper?"

This page is meant to provide general information. All interaction, including online courses, project submissions, etc. will be the course page on moodle.boun.edu.tr

by M.K. Balci and I.B. Fidaner

Date: Spring 2006
In this study, we exploit computational fluid dynamics methods and simulate soft body dynamics under a force field governed by Navier-Stokes equations. The soft body is actually an implicit function, and its surface is tracked by level sets under the influence of the vector field advanced over time. For tessellation, marching cubes algorithm is used. One of the images show the iteration of the force field under Navier-Stokes, and the other shows the force field's impact on our soft body. For 3D Navier-Stokes solver, we modified original Stam's solver for 2D, and used VTK for rendering.

Active Contour Models
by S.K. Balci
Date: Spring 2006
Active contours, also called snakes, are used extensively in computer vision and image processing applications, particularly to locate object boundaries. The essential idea is to evolve a curve or a surface under constraints from an image so that it is attracted to features of interest in an intensity image.
The active contour models in literature can be classified into two broad categories: parametric active contours [1] and geometric active contours. In Kass et al.'s first efforts on active contours, the main idea was to formalize the problem as an energy minimization one. They defined active contours as energy-minimizing splines guided by external constraint forces that pull them toward features such as lines and edges. They also define an internal energy term which is used to impose a smoothness constraint on the moving curve.
Geometric active contour models are based on designing a speed term so that the evolving front gradually attains zero speed as it gets closer to the object boundaries and eventually comes to a stop. The speed term might depend on the boundary of the front while it can also make use of the information inside region enclosed by the evolving front. With the use of level set methods as introduced by Osher-Sethian, geometric active contour models handle changes in topology implicitly and provide robust stopping terms to detect the goal contours.
The figures on the right side show two examples of a new active contour model proposed by Chan and Vese called "Active Contours Without Edges". The model looks for the best approximation of an image as a set of regions with only two different intensities. One of the regions represents the objects to be detected, and the other region corresponds to the background. In their model, Chan and Vese incorporate level set methods with segmentation techniques.
PS: S.K. Balci is a GalataSaray fan.

Face Tracking by Active Shape Models
by I. Ari
Date: Spring 2007
Statistical Shape Models are generative models of a known visual phenomenon. Active Shape Models (ASMs) and Active Appearance Models (AAMs) are two different approaches which use statistical information. In this project, we propose a facial gesture classifier with a similar approach used in 2D+time ASMs. The aim is to classify unseen image sequences to one of the four gesture classes and we give the results on the B.U. Turkish Sign Language Nonmanual Signs Database. 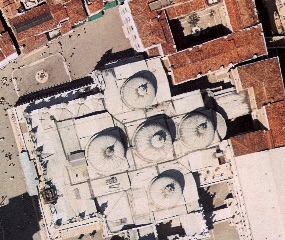 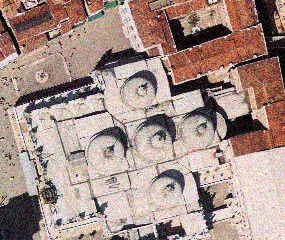 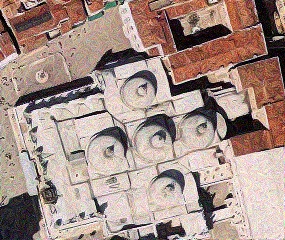 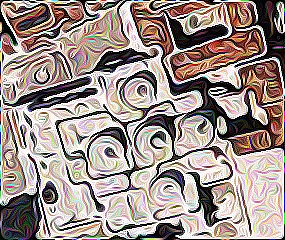 Processing Aerial Photographs by Diffusion Filtering
by H. Ozdemir
Date: Spring 2007
In this work, the effect of a combination of edge enhancing anisotropic diffusion and shock filtering methods is investigated. In edge enhancing anisotropic diffusion, the edge direction is detected and diffusion is steered parallel to this direction. As the first step, input image is smoothed to increase the robustness of the method against noise. Then structure te
nsor is calculated locally for all parts of the image. Diffusion tensor is created using the eigenvectors of the structure tensor